I as well as my wife, are big fans of seasonal spice beers.  There I said it.  A lot of people are put off by spice beers for varying reasons and there are quite a few commercial or home brewed examples to dislike. However, a properly made spice beer that is a beer first and foremost, while be accentuated by quality spices is something everyone enjoy.

I’ve never had Great Lakes Christmas Ale but I would like to think this recipe is what it tastes like  The recipe below is a pretty well tried and tested “clone” attempt of the beer.  You can find a lot of discussion about the processes here on the HomeBrewTalk Forums.  The original recipe is by a user name SingleJohn and I followed it pretty much as written other than I made a hop substitution for what I had on hand.  Normally I adjust and tinker with recipes I find online but having never had the beer and needing to fill a keg with holiday cheer I just went with it as written. 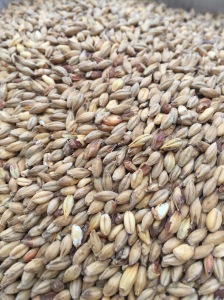 Spices – I never boil spices. However after reading through the recipe thread it seemed like people were getting the results they desired for adding the cinnamon and ginger to a hop sack and boiling them for the duration.  That is what I did and the spices were spot on.

I packaged right around the three week mark

Aroma 9/12:  Initial malt sweetness on the nose which is a blend of honey, caramel, and light alcohol is followed up by a fair amount of ginger with cinnamon in the background.

Flavor 15/20: Strong malt backbone that has some oktoberfest qualities to it a noticeable toasted bread note gives way to a moderately high honey character.  Honey sweetness is blending with alcohol notes which are pleasant.  A moderate ginger spiciness comes out of the honey and finishes with a light cinnamon note.  Balance is decidedly malty finish is semi sweet but is pulled of the tongue by the alcohol and cinnamon dryness.

Overall 8/10:  Really an excellent Winter Seasonal.  A beer designed for 1 or 2 glasses after dinner or around a fireplace.  Smooth and enjoyable.  However the honey and alcohol combine to give a slightly overwhelming sweetness.  Could also use a touch more cinnamon.

I have entered this beer in an upcoming competition and will update with how it does. I loved it as did my wife.  It was supposed to be gifted but yeah that didn’t happen.  I can see the beer as is having a little trouble in judging because it is a sweeter sipper with no real base style.

As for changes to the recipe if / when I rebrew this.  I would leave everything in tact for the most part and add .25 oz of ginger and .5 stick of cinnamon.  As this beer lagered in the kegerator the honey really came forward while some of the spicing diminished.